Microsoft Excel has been around for over three decades yet it is still very valuable. Excel’s original concept hasn’t changed so much from what we have today, just that Excel now looks better and has lots of new capabilities to catch up with today’s data requirements. 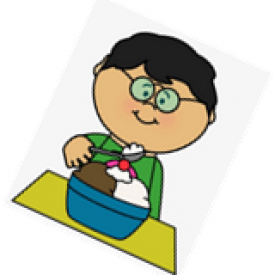 Arnold was a little boy who loved, just loved ice-cream.  He never seemed to be able to have enough.  Every day, straight after lunch, his mother gave him a big bowl with a large dollop of ice-cream.

Soon he would turn five and his mother decided to give him a birthday party.  The party was to take place in a few days.  His mother bought all kinds of goodies and invited all Arnold’s friends.

He could hardly wait.  At last, the big day came ad his friends arrived, bringing him lovely toys.

The table was laid with cakes, sweets, nuts, and jellies and, of course, a large rainbow ice-cream birthday cake.  On top of the cake were five candles and Arnold’s name printed in beautiful letters.  He could not believe his luck.

The children played and ate.  Arnold did not play – he sat in a corner eating his ice-cream.  In fact – he had far too much.

At last it was time for him to blow out the candles.  He took a deep breath, blew, and out they went.

He closed his eyes and wished.  Suddenly Arnold felt he was far away, far from his party in the land of Ice-Cream”.  He was surrounded by a row of bowing ice-cream cones and they said – Arnold, because you love ice-cream so much and it is your birthday, we declare you “King of Ice-cream Land”.  The King of Ice-Cream Land is given a never-ending ice-cream cone that changes flavour with each lick.

Arnold was delighted and eagerly started licking his cone. However, a strange thing happened. He was enjoying the ice-cream so much that he did not notice the ice-cream becoming bigger and bigger.

After a long time, he felt that he had eaten enough and stopped licking, but the cone grew and grew.  He licked and licked, but the more he licked, the faster the flavours changed and the bigger it got.  By now he was feeling quite queasy and wished he could escape from this “monstrous “cone.

Arnold felt a hand on his shoulder.  “Arnold, wake up, you cannot just stand there day-dreaming …………. –  you must cut the cake.”

“Oh Mother”- said Arnold – Ï do not think I could ever eat ice-cream again.